Cairo’s first gig receives a review from Prog’s Chris McGarel and the band reach No6 in Readers’ Poll Tips for 2017. 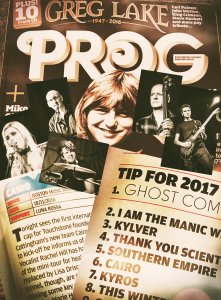 “Firstly, can I just say how pleased we all are that PROG is back on our shelves with Issue #73. What happened just before Christmas ’16 was shocking, but the reaction from the music world – bands and music lovers alike – has been stunning. Plus, of course, Future Music should be congratulated on taking back the publication – and it’s sister publications – and re-employing the editorial staff.

We wish Jerry and team well, as always, and hope that the prog world is now back to it’s healthy and growing equilibrium.We feared our Limelight piece in the December ’16 Synth Issue #72 was going to be in the last publication, but then the January ’17 Greg Lake Issue #73 came out thankfully – and to our pleasant surprise we found the band mentioned twice.

Bearing in mind we had lost Rachel a short time prior – contextually our launch gigs were ‘touch and go’ so we are grateful that PROG attended the gig, and pleased with this review. It was only because of the tenacity and determination of the band, and then the hard graft by Lisa just prior to the gigs, that they happened.

Whilst it was not meant in an entirely complimentary way – we actually love the description of a “21st Century Schizoid Band” so may well use that in future. (Thanks for the strap line, Chris…!) We are also flattered with some of Chris’s comparisons to bands we know and love – namely Porcupine Tree, Tool, and Anathema.

Turning to the Readers’ Poll, it is great to see Ghost Community at the top of the Tips for 2017 having known Matt, Moray and the guys for years, of course, and having known how hard they have worked since launching the band in ’15 and releasing their album in June last year. Congrats to all at GCHQ!

In terms of our position at No.6, we were all mightily surprised to even feature, to be honest, having launched the band only a few months prior to voting in August, and then having released the album about a month before voting started. We really hoped maybe we would feature in that chart for 2018 after gigging the album in 2017. So – we cannot thank Prog readers enough for voting for us in such numbers for us to ‘chart’.

It really was genuinely totally unexpected and we are all determined to do our utmost to fulfil the expectations of those who have shown their faith in us and our music. It makes some of the challenges mentioned earlier all the more worthwhile.

Thank you to all of you who voted for us, from the bottom of our hearts. Lisa, Paul, James, Graham and I look forward to seeing you out there as we add more gigs to our Gig Diary. ‘The Scarab Has Landed’ – now, with Lisa firmly ensconced, we’re going to make it fly…”

Please see www.cairorocks.com/gigs for more information about the band’s next gigs.